Five armed response vehicles full of men armed with assault rifles and wearing balaclavas drove their cars wrecklessly at speed through the estate to detain to local republican activists. They where soon backed up by over half a dozen armoured land rovers who blocked both sides of the road which tried to prevent locals from witnessing the ongoing assault. Rifles where pointed at residents who had come out of their homes to see what was going on and where also threatened by the masked militias.

This political oppressive force has no interest in bettering or building strong communities, as previous reports have divulged they are in league with drug dealers, allowing them to go about their business if they help in their intelligence war against revolutionaries in Ireland.

Residents have expressed their anger at these actions which left parents and children walking in the estate petrified at what they where witnessing. We would encourage everyone to be vigilant and report any incidents of harassment to local members of Republican Sinn Fein so it can be highlighted and challenged. 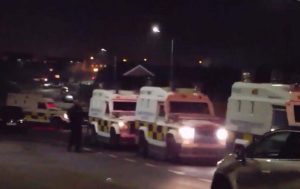