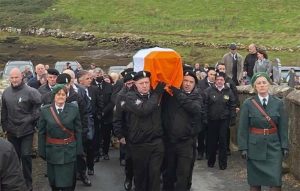 Following Requiem Mass in Newport, Dan’s coffin, draped with the National Flag and flanked by a guard of honour from his comrades in Sinn Féin Poblachtach and ...

The decision by the 26-County High Court to order the extradition to Lithuania of republican Liam Campbell is a gross violation of his human rights. The judgement takes no account of the dreadful human rights record of Lithuania and, as his legal team argued, the fact he would be subject to “inhuman and degrading treatment” once he is handed over to the Lithuanian authorities.
In 2019 the UN’s Committee Against Torture issued a damning report on Lithuanian prisons. In the ...

On Saturday, September 1, a member of Republican Sinn Féin in Tyrone was assaulted and arrested during another in a long line of stop and search operations. He has now been released but must appear in court on September 25 on charges of disorderly behavior, resisting police and assault on police.
During this “stop and search” our member was taken from his car, thrown to the ground and then had two pairs of handcuffs put on him. After being ...

The arrest and remand this morning, August 9, 2018, of our comrade and Sinn Féin Poblachtach member Chris Hamill is just another indication that police, judges and court in the Occupied Six Counties are unchanged.
The RUC/PSNI said he broke bail conditions, imposed on him from previous arbitrary arrests and ongoing court cases, in that he was associating with others who are before the courts. At a time where drug-dealers are released on bail with no conditions, murderers walk the ... 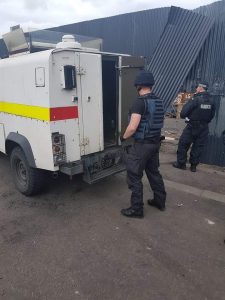 Sinn Féin Poblachtach view with alarm the shooting of young members of the Derry community last night, the readiness of the RUC/PSNI to use these deadly weapons should worry us all. The fact that one victim was hit high on the chest shows that at least one shot was fired high in direct contravention of their own rules.

Since the introduction of plastic bullets ...

Republican Sinn Féin condemns the two attacks on republican monuments in the North Armagh area last night by hate filled sectarian bigots.
One memorial in the craigavon area which commemorates the lives of Gervaise McKerr, Eugene Toman and Sean Burns who were murdered in Lurgan in November 1982 had paint thrown over it.
The Edward Costello memorial garden which was opened 2 years ago by Republican Sinn Fein was also paint bombed. While members where doing their best to rectify ...

Five armed response vehicles full of men armed with assault rifles and wearing balaclavas drove their cars wrecklessly at speed through the estate to detain to local republican activists. They where soon backed up by over half a dozen armoured land rovers who blocked both sides of the road which tried to ...

“The possibility of having your door kicked in at any time of any day, your belongings ransacked, personal items taken away is a daily reality for republicans across the occupied six counties. For some, if you are a former political prisoner, the possibility of having your licence revoked if you question the status quo is a lingering consideration to keep you in line. Think of Martin Corey who spent over four years without even a reason ...

The Thomas Harte Cumann, would like to place on record that the raids carried out on it members home under the so-called Justice and Security Act by the armed wing of the British state uncovered nothing. Reports in the local ‘pro-establishment’ media of drugs being found are misleading lies. We in Republican Sinn Féin condemn both the raid on our members home and the attempts to link the alleged seizure of drugs to Republicans. Republican Sinn ...

New Year Statement from the Leadership of Republican Sinn Féin

New Year Statement from the Leadership of Republican Sinn Féin

Republican Sinn Féin extends New Year’s greetings to friends, supporters and members both in Ireland and internationally. We also salute the Republican prisoners in Maghaberry.

The coming year will be the most significant year of commemoration for this generation. The 1916 Rising was a seminal moment in Irish revolutionary history. It was an assertion in arms of Ireland’s claim to nationhood. In its historical context it came amidst the turmoil of the ...