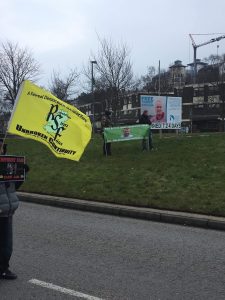 The venue for today’s protest was Free Derry corner where activists from all across Ireland gathered to show their support for Gabriel. Hundreds of Leaflets with information regarding Gabriel’s internment where handed out to locals passing by. We where shown great support by the people of Derry who joined the picket and had a chat with members of Republican Sinn Fein.

We will continue to campaign and protest on Gabriel’s behalf until he is released from Maghaberry jail. There will be more events and protests held in the coming months to further highlight the matter.

Thanks to everyone who attended today and showed their support today.