The arrest and remand this morning, August 9, 2018, of our comrade and Sinn Féin Poblachtach member Chris Hamill is just another indication that police, judges and court in the Occupied Six Counties are unchanged.
The RUC/PSNI said he broke bail conditions, imposed on him from previous arbitrary arrests and ongoing court cases, in that he was associating with others who are before the courts. At a time where drug-dealers are released on bail with no conditions, murderers walk the same streets as their victims’ families, a Republican cannot get any form of justice. Republicans will always fare worse in a system built upon oppression and sectarianism.
On the night of August 8 Chris Hamill attended the Anti-Internment bonfire and open-air music session in Craigavon along with his young son. This is a public event organised by the residents of Drumbeg and Meadowbrook to commemorate the internment of Republicans and Nationalists in 1971. It was attended by hundreds of people from Craigavon, Lurgan and further afield.
In such a small open event it is difficult not to be close to neighbours, yet in the early hours of this morning Chris was singled out by the police for arrest. This is not the first time he has been singled out. A campaign by RUC and Special Branch against Chris has been ongoing for over a year, culminating in several arrests, the loss of his job, damage to his home on several occasions and an insulting charge that he “intimidated the police” for highlighting the harassment he receives on a weekly basis.
Attempts have even been made to get Chris to become an informer, with offers of cash etc, all of which he has had documented. Only last month it was pointed out in court by his legal team that merely going out of his front door could lead to him breaking the ridiculous conditions of association imposed on him, as he lives within a few hundred yards of other members of Sinn Féin. This was dismissed by the courts, and here we are today with him being arrested for exactly what the legal argument stated.
For those who try convince the people of the Occupied Six Counties that we have a new police, a better police we point out this harassment and similar happening across the Six Counties as proof of your lies. This sectarian police force has not changed. As we say, “Different Name; Same Aim”.
We commend our comrade Chris for the principled stand he is taking, to be unbowed in his opposition towards this harassment. His comrades and community stand full-square behind him. We will continue to highlight this sectarian police force and the unnatural nature of the occupation on the six north-eastern counties of Ireland until the Republic is re-established.
Daire Mac Cionnaith
Leas-Uachtarán
Sinn Féin Poblachtach
Críoch 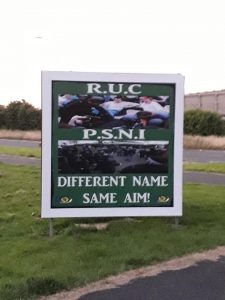