Republican Sinn Féin condemns the two attacks on republican monuments in the North Armagh area last night by hate filled sectarian bigots.
One memorial in the craigavon area which commemorates the lives of Gervaise McKerr, Eugene Toman and Sean Burns who were murdered in Lurgan in November 1982 had paint thrown over it.
The Edward Costello memorial garden which was opened 2 years ago by Republican Sinn Fein was also paint bombed. While members where doing their best to rectify the damage 2 armoured RUC cars pulled up and began to taunt people by laughing and waving.
These attacks are designed to try and raise tensions ahead of this year’s 12th of July which see’s hundreds of sectarian orange marches taking place.
These attacks will not be tolerated against our communities in any shape or form. To the people carrying out these we would like to remind you that actions have consequences.
Any one with information on who might be responsible for these attacks can contact a member of Republican Sinn Féin.
Thomas Harte Cumann PRO. 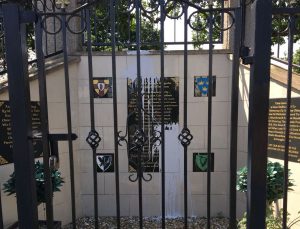