As to date, all within our community will be aware of the ongoing construction which commenced on Thursday within the Republican landings in Roe House. Now that the construction is coming to an end it is clear to be seen that the jail administration has employed yet another dirty trick.

The access to the canteen /Recreation room has seen controlled movement enhanced whereas before we only had to travel down one one stair in this area, we now have to traverse three corridors beginning with a turn stile and ending with a turn stile. From today January 31a number of POWs have been charged with refusing to lock up as the system cranks up the pressure.

Over the past few day the screws have continuously locked us using the excuse that alarms are sounding from other landings, We feel that theses alarms are being deliberately activated in an attempt to slow down movement on our landing; coupled with the fact that the new turn-styles are causing great problems as the screws in the pod are now operating a go slow policy when moving POWs about the wing thus tightening controlled movement as opposed to relaxing it.
How can this be interpreted as progress? They have constructed cages which link three areas on Roe 4 and two areas on Roe 3.

This sees unprecedented levels of control inflicted on Republican POWs to the extent that security bully boy Brian Armour refused POWs access to food on Sunday, January 25. His reasoning for this is because in his view there were too many POWs in the “said area”, yet in his words the reason for creating the cages was to allow unlimited numbers access to the three areas.

He also refused to pass the food through a purpose built opening. We continue to highlight the situation because of the lack of progress since 2010.

The jail was also lockdown on Sunday February 1, 2015 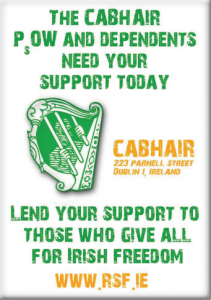