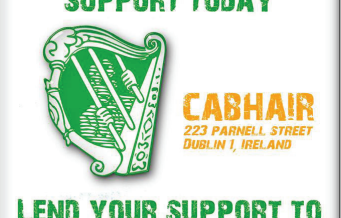 The incident which occurred when a Republican P.O.W’s partner had to take one of her four children to the toilet, the child is 5 years of age. Upon reaching the desk she was prevented from leaving by the screws who informed her if she wanted to take one child to the toilet she would have to take all her children. The child was effectively refused access to toilet facilities. The Republican P.O.W called for the S.O to explain why this was now an issue when for the past two years on occasion and in similar circumstances his partner was permitted to leave with the child whilst leaving the others with their father.

The S.O arrived and stated that it was always policy but it’s only now being enforced, the P.O.W rightly argued that this was nonsense and the screws created yet another confrontation. This incident has left the children of the Republican P.O.W deeply upset after hearing how the screws spoke to their mother and father and also witnessing the petty vindictiveness of the screws actions toward their family. The children are now scared to return to visit their father.

The S.O then appears at the end of the visit and attempts to give Republican P.O.W’s a direct order from the governor to leave the visitation area or they will be charged. Let us state clearly and unequivocally that no Republican P.O.W accepts any order given by a member of the British state apparatus.

This is not the first incident which has happened during our visitation and it will not be tolerated, at every opportunity Republican P.O.W’s have taken great lengths to achieve a conflict free environment, but the blatant intimidation of our families is not acceptable and will be met head on and we will use every resource that we have to bring an end to the corruption enforced by the Maghaberry Jail administration. We the CIRA POWs would like to thank the wife of another POWs for her support this morning as it took a lot of courage to stand up to the bully boys in Maghaberry.