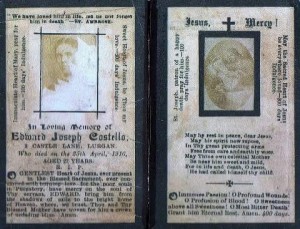 The Thomas Harte Cumann North Armagh have undertaken a huge project to erect a memorial garden as a fitting tribute to those who paid the ultimate sacrifice in the cause of Irish freedom over the past 100 years.

Our members have for the last year collected funds week in week out in the form of our monthly lotto from the good people of Lurgan and Craigavon, to make this project possible to coincide with this years 1916 centenary. Work has now commenced on the site which has been carefully chosen on reclaimed land which previously had garages on it, our members are working hard and tirelessly to have it completed in time for the Easter week centenary anniversary.

The aim of the Thomas Harte Cumann, RSF is to pay tribute to all men and women who fought and died for Ireland. The main focal point of this being on Edward Costello from church place in Lurgan, whilst working in Dublin he joined the Irish volunteers in 1915 .he was mobilised on the 24th of April 1916 and took part in the Easter rising he received a fatal bullet wound to his head on the 25th of April 1916 and later died in Jervis street hospital Dublin he was only 27 years old .we hope that the completion of this memorial garden will go some way in honoring Ireland’s patriot dead.