Internment by remand: another RUC attempt to intimidate and silence Republican Sinn Féin 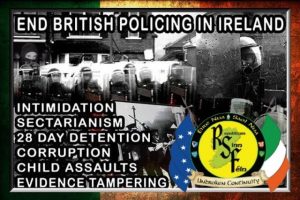 Once again Republicans and nationalists have seen the arm of the British State use internment by remand to target those who wish to challenge the status quo in the Six Occupied Counties.

At 8.30am this morning (August 16, 2018) a member of the Thomas Harte Cumann of Sinn Féin Poblachtach, Lurgan/Craigavon, North Armagh, was arrested on his way to work and remanded into Maghaberry on the word of the RUC/PSNI, eight days after the arrest of Christopher Hamill, who has been held in Maghaberry jail since.

The RUC/PSNI claim that Stephen Conlon broke his bail conditions on August 9 at the Craigavon anti-internment bonfire by associating with another member of the Cumann, Christopher Hamill, whom he has been banned by the courts from associating or having any contact with. This is a result of ridiculous charges laid against at least eight members of Sinn Féin Poblachtach for taking part in an Easter commemoration earlier this year when the RUC/PSNI showed the world that they have not changed when they stormed our Easter commemoration and arrested our colour party.

The silence from those who prop up British rule in Ireland is deafening. These same collaborators in the Provisional movement and the SDLP were tripping over each other in their condemnation of the Craigavon anti-internment bonfire. Not one word of condemnation from John O’Dowd on the arrest and internment of two Republicans from Lurgan.

Tonight two Republican Sinn Féin members are being held in Maghaberry jail on charges which amount to at the most public order offences and do not carry a jail sentence. Republican Sinn Féin views this as another attempt to intimidate and silence us and we once again make it clear that the British State will not succeed in doing so.

We will continue to highlight the unnatural nature of the occupation in the six north-eastern counties of Ireland until the Republic is re-established.