“There has been a sinister development in the treatment of interned Republican Gabriel Mackle and the regime at Maghaberry prison is now subjecting him to treatment which is tantamount to psychological torture. The British state, not content with the internment of Gabriel have now moved to direct its staff at Maghaberry concentration camp, to degrade, humiliate and breakdown Gabriel. This is nothing new, he has faced it down before and will do so until his unjust imprisonment is overturned. Gabriel has been denied all access to mail, letters and cards from family and friends. He is routinely refused contact via the phone by the vindictive screws and now is having his family visits disrupted and cancelled a few moments after they have started.

Gabriel’s partner Joanne visited him this morning (November 26) accompanied by two friends, for one of the friends it was the first time they have ever attended a visit and as such were unaware of the ridiculous rules imposed upon visiting family and friends. She had purchased a coffee at the shop but it being too hot to drink she took the lid off the cup to let it cool, immediately the table was surrounded by screws who told Gabriel to get up, that his visit was cancelled. Despite pleas from Joanne, Gabriel was dragged out of the visiting room. This is could have simply been rectified with a request to place the lid back onto the cup, but instead the brutish screws, with an authority complex moved in, with their usual heavy handed response. Joanne attempted to lodge a complaint with the ‘family’ officer, who refused to take it, instead telling her to place it in writing, and the ‘family’ officer even refused to allocate another visit.

The entire episode was clearly orchestrated, waiting and seizing upon the opportunity to strike at an innocent man and his family. In the prison’s own rulebook, rule 67 which was revised to comply with the Human Rights Act 1998, (HRA) states that restrictions on communications can only be applied with the guidance of the HRA. To date Gabriel has not been informed of his communications being under rule 67, he is simply being denied access to it, perhaps getting a phone call home once a week. The jail administration, which is under the guidance of MI5 are only interested in destroying families and persecuting a man who stands without charge or trial and are content not only to imprison Gabriel by his family also.

In an attempt to deny his right to political status, Gabriel has been isolated by the administration still refusing to locate him on the political landings of Roe house and keeping him in Bann House. This poses a serious risk to his personal safety from Loyalists and criminal elements. It is a clear attempt to deny Gabriel his right to political status. It is the same psychological torture which is still being inflicted upon republican prisoners as a whole.” 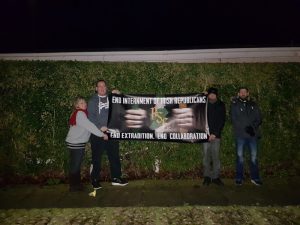